A Demon-Haunted World After All, Part 1 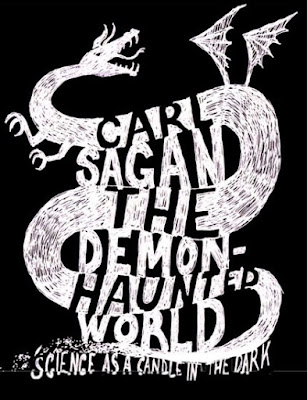 Carl Sagan's landmark jeremiad The Demon-Haunted World: Science as a Candle in the Dark marks its twenty-fifth birthday this year, an event it will probably be celebrating mostly by itself. Still, along with others like The God Delusion, The End of Faith, God is Not Great and Darwin's Dangerous Idea it was, for a brief moment, held up as the new canon, the new gospels for a worldwide Scientistic Utopia.

Look around you; see any signs of that Utopia out there? Yeah, me neither.

In fact, it very much feels like the world is very much haunted by demons these days. In fact, demonic spirits seem to be having the utter run of the place. How did this happen? How did we get here?

Well, there are a lot of reasons for it. But a lot of it stems from a powerful and well-funded movement that set out to destroy established religion and soon realized it didn't have anything viable to replace it with.

And you know what they say; Nature abhors a vacuum. 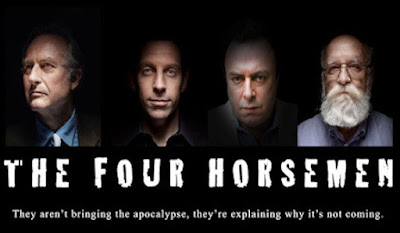 Nu Scientism (AKA Nu Atheism) and its praxis Nu Skepticism made a huge splash in the late '00s and early '10s. The movement had a lot of money, a lot of star power and a lot of media support on their side. The Demon-Haunted World was seen as a foundational text and Sagan himself was seen as a Patriarch to the new faithless faith.

Alas, the crusade was short-lived. A major schism emerged almost immediately between the actual scientists and the camp followers (mostly I Fucking Love Science-type amateur bloggers) over the then-nascent/now-dominant Woke theocracy, ultimately resulting in the Atheism-Plus spinoff.

The cudgel the Atheism-Plus inquisitors used against their former idols was the Woke moving-goalpost of "misogyny," and soon many of the founding fathers of Nu Scientism found themselves dodging sexual harassment claims and others accusations of "misogyny." They didn't do so very effectively. Richard Dawkins even started making bizarre apologies for pedophilia, or at least doing so publicly.

There's a great temptation to dismiss all of this intramural drama as simply more entitled Millennial hysteria and the bitterness of disillusioned groupies, but the Atheism-Plus movement actually did the world a tremendous favor and threw back the curtain on who was one of the biggest hands pulling the levers on New Scientism.

And that, of course, was none other than the late, unlamented Jeffrey Epstein. 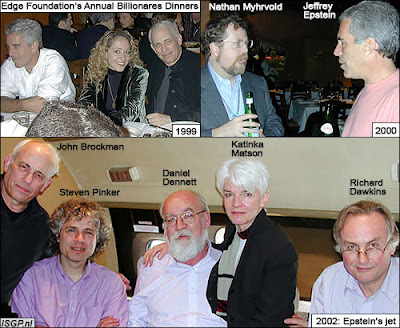 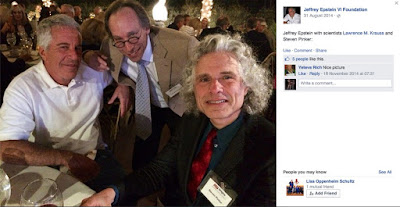 Epstein's money was the driving force behind New Scientism and its comic-book corollaries like Transhumanism. Along with Bill Gates and other paranoid billionaires, Epstein funded Transhumanist associations and Transhumanist-adjacent research at major universities to the tune of tens of millions of dollars.

And Epstein courted and financed many of the leading figures in New Scientism.

He held conferences to court New Scientismists and parties to raise cash for them. This vast network of money and influence fed a constant stream of propaganda to the credulous children who've been manning the science desks at major media outlets since the 2007 financial crisis swept away all the real journalists.

In that light, do notice that the New Scientism and Nu Atheist movements began to flounder when Epstein started getting hammered by lawsuits from his former sex-slaves around 2014-5.

Sure, if you believe in coincidences.

Before all that there was Carl Sagan and his Demon-Haunted World. The book got a lot of hype in 1995 but not quite so much love in the sales department. But it was a easy, breezy read and was clung to the bosom of aspiring atheists and skeptics.

There's no question that Sagan was a brilliant man. He had an extremely sharp mind and was a very agile pitchman for Big Science in the mass media. Ironically, his sales skills are actually a bit unlikely, given that he originally plied his trade as an astronomer/ astrophysicist/ cosmologist, so-called "pure sciences" with near-zero practical use for anyone who isn't an astronomer, astrophysicist or cosmologist.

Still, his Cosmos series was a hit for PBS and as long as there are school field trips there'll be a market for that kind of thing. (Um, wait...)

Sagan took on a whole host of demons in his Demon-Haunted book, but UFOlogy seemed to be his primary bugaboo since it was the biggest deal at the time. (So much so that legions of his fellow skeptics were trying to ride the gravy train by publishing anti-UFO books, some of which disguised their real agenda on the covers. I doubt a lot of people were fooled, but a lot of kids probably got them as crappy presents from their least favorite aunts).

But Sagan also throws down with mediums, cryptozoology, Psi, the Face on Mars, NDEs, hypnotherapy, channeling, and the rest of the late 80s/early 90s catalog of New Age and fringe beliefs and practices.

Hard to remember a time when you could expect to get on the best-seller list going after such things, but Carl Sagan helped make this timeline we're stuck in today, so you know; karma.

Mind you, the world Sagan was talking about was a much different world than our own.

Christianity was certainly waning but was still held in wide esteem, at least theoretically. You also saw the rise of megachurches, the Promise Keepers and pseudo-Christian cultic movements like Prosperity Gospel, and most survey respondents would claim to believe in God.

The average voter was generally more conservative, in large-part due to the booming economy and childbirth rates. Baby Boomers were coming into power, but didn't quite have the maniacal deathgrip they would take on the controls in the Bush II/Obama Administration.

UFOs were peaking as a popular phenomenon: TV shows like Sightings and Unsolved Mysteries did regular segments on them, The X-Files was gaining ground in the ratings and UFO conventions were held all around the US on a regular basis.

UFOs were also bleeding into the militia and apocalyptic cult undergrounds. Bill Cooper published Behold a Pale Horse in 1991 and it soon became a foundational text for a strange admixture of religion, militarism and fringe politics brewing in Middle America.

Moreover, the New Age movement and its offshoots were still seen as weird and culty by the mainstream, unlike today where the New Age is so interwoven into the mainstream (such as it is) that no one even notices it exists anymore.

You certainly wouldn't have The New York Times actively promoting witchcraft back then, like we do today. So Sagan might have been throwing a lot of shade, but could be reasonably confident the Establishment would have his back

Moreover, events in the wake of the publication of Demon-Haunted World seemed to vindicate Sagan's thesis: the Solar Temple and Heaven's Gate mass suicides, Oklahoma City, the Aum Shinrikyo terror attacks, just to name a few.

Unfortunately, Sagan wouldn't be alive to bask in a lot of this validation, dying of cancer in December of 1996.

But by the same token, Sagan wouldn't be alive for what's going on now, with the rise of Woke, the mainstreaming of the occult and the beating that the science establishment has been taking vis a vis trustworthiness and credibility. Nor would he see his first wife and son wander far off Big Science's reservation when it came to hot-button topics like AIDS and 9/11.

And of course, Sagan wouldn't have been alive for the Fall of the House of Epstein.

Secret Sun Book Nook v.2.0 is up and running! Thanks in part to the generosity of a Secret Sun Stalwart, there is some incredible stuff up there, like brand-new copies of the Sola Busca Tarocchi, The Essential Paul Laffoley, Alan Moore's Providence and tons more!

There's a vintage edition of MacGregor Mathers' The Kabbalah Unveiled, The Complete David Flynn, some vintage conspiracy classics and even a section of icons and statues for your pleasure.

Check it out now! Get yourself some effin' awesome stuff and help keep this work alive!