Interesting Ric and Morty ad there. But there's something about this that looks oddly familiar... 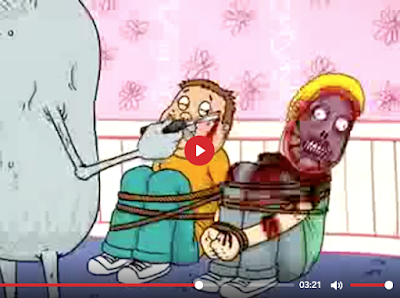 ...can anyone help me out here?

Aside from that, what else do we have on the menu? Well, I guess Space Force entrainment...

But seriously; couldn't Olay have spent a little more money on the special effects here? This looks almost as cheesy as an ISS video.

I guess that's how you know it's real. Because it looks so fake.

Wal*Mart's getting in on the fun, leavening their conditioning with a nostalgic look back at the Hollywood icons that we once loved so well and have since succumbed to Stage 5 Wokeinoma.

Remember the picture shows, Mabel? Gosh, wasn't that a time?

And the Minority Report dream of self-driving vehicles -- meaning vehicles that rob the driver of personal autonomy -- gets a comforting varnish of 90s vintage Boston Gothic nostalgia.

Cap sounds right but Krasinski and Dratch's accents sound like they must be from the North Shore, or anywhere in Massachusetts where people loathe and detest Boston accents.

Yep, Krasinski grew up in Newton and Dratch grew up in Lexingston. That explains it. Where's an Affleck when you need one?

Jesus, is Missy going to be one of those faded celebrities they only pay attention to for mass public rituals and soda commercials? FFS, where's my CD of Miss E at?

I'll be in the past if anyone needs me.


Here's some clips from the rest of them. Watch at your own cognitive risk.