Avatar, or Superman in Reverse

Avatar just pounded its philosophical opposite, The Dark Knight, into the box office dust, so James Cameron now has the top two grossing movies of all time under his belt. As with any hugely successful film, the writs against Avatar have started flying from various authors claiming infringement.
Strangely enough, the Frank Herbert estate seems to be holding fire, though we've seen that Herbert's 'Pandora' books might seem to have as strong as case as any for creative borrowing. As we've discussed, the film also borrows liberally from Edgar Rice Burroughs' John Carter of Mars stories, themselves influenced by Hindu concepts - by way of Theosophy.
This is an important point, since the incorporation of occult ideas into pop culture (specifically the weird mix of Hindu and Western mysticism popularized by Theosophy) was most certainly a conscious process in Burroughs' time, but has become so ingrained the DNA of our culture that many- if not most- of the people playing with these memes today have no idea where they spring from.
In fact, far too many geeks openly sneer at esotericism and the occult, completely oblivious to the fact that sci-fi and superheroes are a direct outgrowth of it. Indeed, it's in pop culture- that is to say, the mythic realm- where all of those weird esoteric ideas would ultimately triumph.
There was a fascinating yet disastrous attempt to develop 'spiritual sciences' (now labeled as 'pseudosciences') after the collapse of the Theosophical/Spiritualist movements, as well as the rise of the proto-New Age movement, but all of the spiritual striving of those old Victorians would take a major detour - first into 'junk culture' (crappy pulps, crappy comics, crappy movie serials) and then into the mainstream as computer technology won the day for 'geek culture' (itself a pseudo-religious outgrowth of the old 'junk culture' paradigm) by allowing the uninitiated to truly step into all of these alternate realities that heretofore only existed in the geek imagination.
An ongoing economic upheaval roughly similar to the Industrial Revolution is creating a compelling psychological demand for these realities, this time in the form of high-tech entertainment and not religion, as it did in the Victorian Era. Despite the various cults and sects constantly popping up, it's increasingly unlikely that a mass movement like Spiritualism or Theosophy could fill the void left by the erosion of traditional religion in the West. 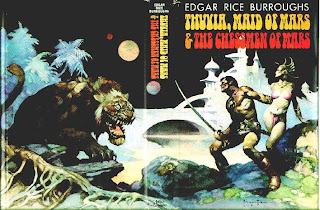 Carthoris and Thuvia of Mars, illustrated by Frank Frazetta
It's all the more than ironic then that the two big Christmas season genre blockbusters- Avatar and Sherlock Holmes- are both the direct result of the influence of esotericism on pop culture that I traced in Our Gods Wear Spandex. Arthur Conan Doyle was a lifelong adherent of Spiritualism and Edgar Rice Burroughs took concepts lock, stock and barrel from Theosophy.
From Spandex:

Burroughs’ Mars stories are alternately known as the 'John Carter, Warlord of Mars' series or among hardcore fans, the 'Barsoom' series. What is most remarkable about the Mars stories is that Carter reached the Red Planet not by rocket, but by using the occult art of astral projection. Writing from Carter ‘s point of view, Burroughs describes how this occurred:

"My attention was quickly riveted by a large red star close to the distant horizon... As I gazed at it on that far-gone night it seemed to call across the unthinkable void... I closed my eyes, stretched out my arms toward the god of my vocation and felt myself drawn with the suddenness of thought through the trackless immensity of space.”

Writer Fritz Leiber later weighed in on the esoteric roots of Burroughs' space-faring hero in an article entitled "John Carter -- Sword of Theosophy," which ran in the fanzine Amra in 1959. Leiber noted that a pamphlet on Theosophy's alternative history "sounded to me very much like good old Barsoom with its green men, white priests, levitating battleships, egg-laying princesses, and all the rest. In short, I got the impression that Edgar Rice Burroughs had found in Theosophy a rich source of background materials for his Mars books..."

Leiber also noted the other themes in the Mars stories that were initially popularized in Theosophist literature, including "instantaneous interplanetary travel by thought power...airships held aloft by tanks of these rays... creation of phantom and living matter by thought power... and finally the oppression and persecution of wise freethinkers by an evil priesthood."

Sword-and sorcery legend L. Sprague De Camp added that "(a)ltogether life in the Theosophical Atlantis resembles nothing so much as life on Mars as pictured in the Martian novels of Edgar Rice Burroughs." 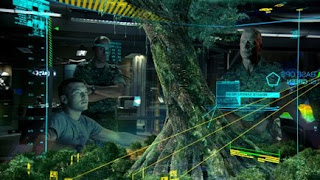 More importantly, Burroughs claimed that all of the Martian races descended from the 'Tree of Life', a term borrowed from the Kabbalah.

Not only can John Carter astral project himself into space, he is also immortal. And because of the lighter gravity of Mars, he is a superman there. He becomes a Martian warlord when he marries the Martian princess Dejah Thoris. It's hardly surprising in this context that the John Carter stories were such an influence on occultist/rocket scientist Jack Parsons.

But not only do we see traces of the Barsoom stories in Avatar, but also from other Burroughs' stories:

Following the success of Tarzan and John Carter, Burroughs introduced the Pellucidar novels, starting with with At the Earth's Core in 1922. In this tale, a group of scientists discover another world inside the Earth's crust. This world, Pellucidar, is inhabited by dinosaurs and - believe it or not - psychic pterodactyls.

Now, do you remember those Pandoran pterodactyls, with whom the natives psychically link up to via their bioorganic USB hubs? More from Our Gods Wear Spandex:

Later Burroughs would introduce the 'Carson of Venus' books, starting with The Pirates of Venus, first serialized in Argosy in 1932. This series detailed the adventures of astronaut Carson Napier, who crash lands on Venus. Like Carter, Carson has occult powers, in this case telepathy.

All of the these psychic supermen seem to reflect Burroughs straining towards a new race, one that was not only physically powerful and morally upright, but possessed extrasensory, occult powers that would act to truly separate them from the benighted masses of humanity.

Burroughs is one of the founding fathers of the modern superhero (and superhero merchandising), and his work directly inspired comics creators like Lee & Kirby and Siegel & Shuster. Cameron's Jake Sully is not only a future-tech reincarnation (or 'avatar') of Burroughs' heroes like John Carter and Tarzan, he's as much of an evolution away from Siegel and Shuster's Superman as Superman was from characters like Tarzan. In many ways, Sully is Superman in reverse:

• Superman was the powerful alien who came to Earth from his dying planet and takes on the identity of a meek and mild mannered reporter (a geek in other words).

• But Jake Sully is the disabled Earthman who travels to a planet filled with powerful aliens and takes on the identity of a fierce alien warrior.

• His Lois Lane is a fierce alien warrior princess and his Jimmy Olsen is an excitable Earth-geek in Pandoran drag. His Jor-El mentor figure is Sigourney Weaver, who herself is playing the reverse of her Ripley character from the Aliens films.

• Avatar's Lex Luthor (Colonel Quaritch) is similar in motivation to Grant Morrison's take - world domination is his right and privilege and Sully/Superman is an alien interloper (or worse, a race traitor) standing in his way. Like Luthor and Superman they start off as allies.

• As a bonus, maybe you can toss in Selfridge (pronounced "self-rich") as Sully's Perry White (or better yet, his J. Jonah Jameson).

But there's a more important twist- reversal- that is making Avatar such a huge hit. Superman is a god, and his power comes by birthright. He did nothing to earn it, and he can't give any his of his power to you. In the real world, Superman would be the most hated man on the planet, and no one would rest comfortably until he was destroyed or sent back into space.
But Jake Sully could be you. In fact, for almost three hours, he was you. And that's exactly why so many people are lining up to see this film.
Maybe one day, you could trade your crappy human body for an alien upgrade via the sorcery of genetic engineering. Maybe you could be redesigned to fit seamlessly into your environment without need of air conditioners, automobiles and antibiotics. Maybe your great-grandchildren will one day live on a planet that isn't constantly trying to kill them with typhoons, tornadoes and typhus.
Cameron has become the most successful filmmaker in history by pressing people's buttons. He knows who we hate - the rich, the powerful, the bullies, the back-stabbers, the ass-kissers - and he makes them suffer horribly. And he also usually makes sure that the character you most identify with is given the extraordinary power to do so.
Whether it's a pet killer robot or a cybernetic shell or a giant alien body, his films empower the viewer to take revenge on symbols of our daily oppression. So it isn't just the stunning virtual reality-level cinematography, or the lush, verdant world so meticulously displayed onscreen that's pulling in the crowds. It's the intimation- almost certainly intentional on Cameron's part- that one day we will have the technology to make you a god, or at least an avatar of one.
Maybe watching a future memory is enough for now. But kids especially are becoming increasingly acclimated not only to superpower memes but also to virtual environments, whether through 3D film or games like World of Warcraft. And sooner rather than later, someone is going to take Cameron's ball and run with it, and create a Pandora-like environment for a game or VR installation in which the viewer controls the avatar.
Which itself could be a dress rehearsal for something even more compelling. Or dangerous, even.
UPDATE: I almost forgot about 'Augmented Reality'.